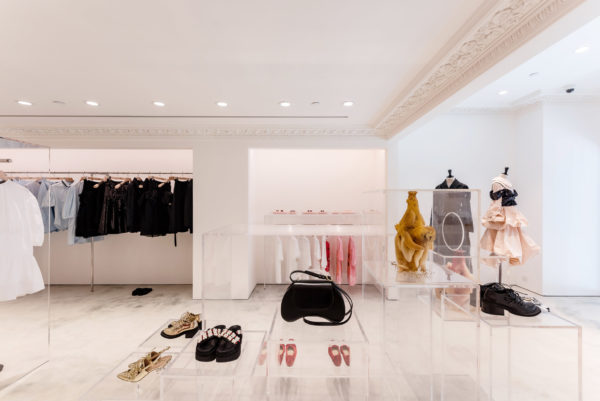 Francis Bacon prints and honeycomb feature in Simone Rocha’s Hong Kong store. Sculptural bees nests encased in transparent boxes are the focal point of Simone Rocha’s new store that has opened in Hong Kong. The Simone Rocha store has been designed by the fashion label’s inhouse team to feature a host of unusual artworks, resulting in a gallery-like interior.

At the centre of the 84 square-metre space is a handful of clear perspex boxes. While some serve as display plinths for shoes and handbags, others contain honeycomb from bees nests that function as sculptures, by Chinese artist Ren Ri.

Ri – who took up beekeeping as a hobby in 2006 – achieved the warped shape of the works by changing the orientation of the bee hives once every week, encouraging the winged insects inside to continuously change and adapt the framework of the nest.

Towards the rear of the store is a chunky service counter crafted from baby-pink onyx. Behind it lies a trio of lithographic prints of Francis Bacon’s Triptych August 1972 – a three-part painting that the 20th-century artist completed following the suicide of his lover, George Dyer.