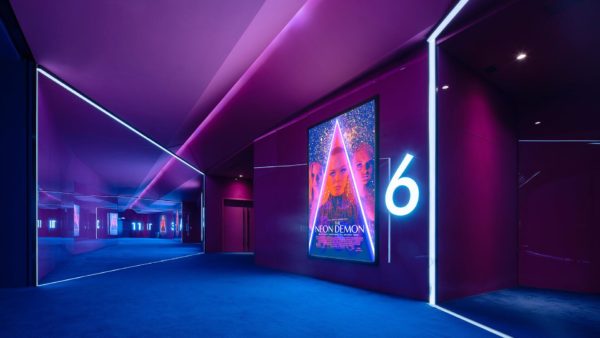 China looks to art galleries to bring some novelty into movie theatres. One of the fastest-growing theatrical movie markets in the world, China has reportedly beaten the United States when it comes to box-office revenue. But the first half of 2019 is showing a decline. As the number of theatres – and thus screens – in the country keeps rising, how should the typology of the cinema evolve to turn the tides?

Architect Alexander Wong, responsible for over 20 built movie houses, thinks both the medium of the film, as well as the surroundings in which films are screened, are in need of an update. He paves the way with a movie theatre inspired by art galleries. In designing the Shanghai venue named Maison Muse, the designers took inspiration from the spatial qualities of art galleries and museums, where the architecture doesn’t overpower the product on show. For the material selection, the team took inspiration from the art gallery, too.

The main lobby features white stone, wood and glass. Counterbalancing these calmer areas are spaces dominated by ultraviolet blues and shocking fuchsia. Inspired by the lens of a movie camera, circular elements are a recurring theme in the interior – from the electronic poster boxes to the signage elements. In the Skyfall Restrooms giant LED screens surround visitors with extremely sensorial videos of underwater lifeforms.