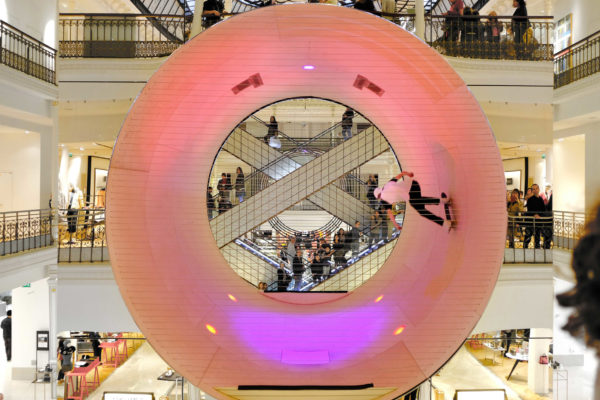 Le Bon Marché have added a skate ramp encased within a reflective silver cube in the atrium of their department store in Paris.

The installation – called Le Cube – was unveiled as the centrepiece of the Los Angeles Rive Gauche exhibition in Paris, where a curated selection of LA fashion, beauty, and lifestyle products were displayed inside the French capital’s Le Bon Marché department store.

The mirrored cube was placed in the store’s central atrium and is punctuated by a full-pipe – a 360-degree concave structure that skateboarders use to perform gravity-defying stunts.

Intended to function as both a stage and a sculpture, the elevated full-pipe hosted live skate performances several times a week. Its reflective surface also meant that, when the cube was not in use, shoppers walking along the balconies that wrap Le Bon Marché’s atrium could catch their own reflection and take photos.

Le Cube assists in the rethinking of how the future of retail shall exist not only as a shopping experience, but more importantly, as an exhibition, performance, and spectacle. The historical setting of Le Bon Marché, the original retail department store, sets this precedent.