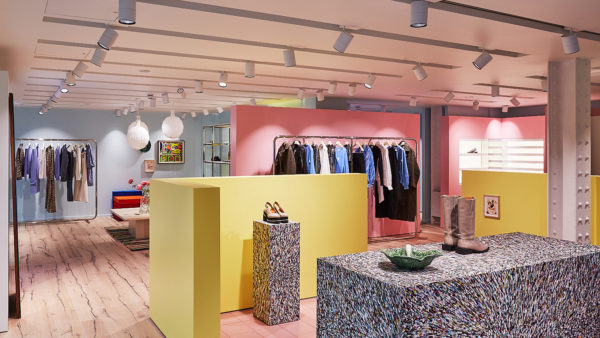 The store opened its doors on Soho’s Beak Street on Saturday 17 August, signalling the first time that UK shoppers are able to “experience the Ganni universe in full” – until now the brand has exclusively been available online or via high-end fashion boutiques. It also has 22 branches dotted across Denmark, Norway and Sweden. Speaking about the idea behind the concept, the designer stated: “The store is much like the way we Danes decorate our homes, full of colour and different surfaces and textures.”

Peripheral walls have been painted skyblue or bubblegum-pink, while a couple of chunky, L-shaped partitions are butter-yellow. The floor is a similarly clashing mix – in some areas it’s clad with red tiles, while in others it’s been covered with navy carpeting or timber boards. The opening of Ganni’s London store forms part of the brand’s global expansion scheme, which will also see flagships open in New York and Los Angeles in late 2019.